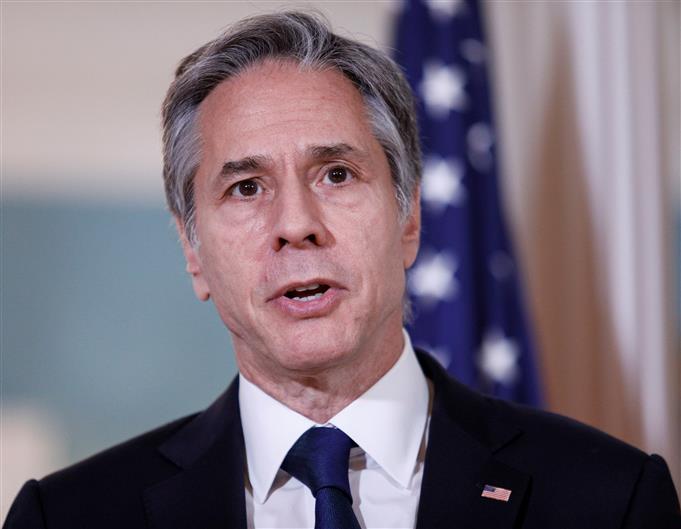 US officials say the Biden administration is aiming to lead the international bloc opposed to Russia’s invasion of Ukraine into a broader coalition to counter what it sees as a more serious, long-term threat to global order from China.

The official said Secretary of State Antony Blinken will lay out a three-pillar approach to competing with Beijing in a race to define the 21st century’s economic and military balance in a Thursday speech outlining the administration’s China policy.

While the US sees Russia as the most acute and threat to international stability, the immediate officials said the administration believes China poses a greater danger and is marshaling its resources, friends and allies to push back on increasing Chinese assertiveness around the world.

The officials acknowledged that the US has limited ability to directly influence China’s intentions and ambitions. They said the administration would focus instead on shaping the strategic environment around China.

The officials spoke to reporters on the condition of anonymity to preview Blinken’s speech, to be delivered at George Washington University. The speech follows President Joe Biden’s just-concluded visits to South Korea and Japan, where China loomed large in discussions.

Biden raised eyebrows during that trip when he said that the United States would act militarily to help Taiwan defend itself in the event of an invasion by China, which regards the island as a renegade province.

The administration scrambled to insist that Biden was not changing American policy and the officials said Blinken will restate that the US has not changed its position. Blinken will say that Washington still holds to its “One China” policy, which recognises Beijing but allows for unofficial links with and arms sales to Taipei.

The officials said Blinken will make the case that the global response to Russian President Vladimir Putin’s invasion of Ukraine serves as a template for dealing with China’s efforts to mold a new and unpredictable world order to replace the rules and institutions that have guided relations between states since the end of World War II.

One official said that Blinken will tell his audience that “by preventing Putin from achieving his aims, we believe we are greatly strengthening our hands to defend and uphold disorder against challenges by others.” And, the official said, Blinken will note that “China is the one country that has the intention as well as the economic, technological, military and diplomatic means to advance a different vision of international order.” Blinken will say that the administration intends to leverage its success in rallying support for Ukraine against Russia to align US allies and to counter China, according to the partners. Investment in domestic US infrastructure and technology along with stepping up diplomatic outreach to potentially vulnerable countries are other elements of the policy, the officials said.

In the latest manifestation of China’s push to expand its reach that has drawn concern from the US and other democracies, Chinese Foreign Minister Wang Yi on Thursday began an eight-nation tour of Pacific islands during which Beijing hopes to strike a sweeping agreement that covers everything from security to fisheries.

Wang opened his tour in the Solomon Islands, which last month signed a security cooperation pact with China that some fear could lead to a Chinese military presence there. The agreement was finalized shortly after the Biden administration announced it would open a US embassy in the Solomons as part of its efforts to engage in the greater Indo-Pacific region.

The Biden administration has kept in place confrontational policies toward China adopted by its predecessor in response to Chinese actions in its western Xinjiang region, Hong Kong, Tibet and the South China Sea.

And, while the administration sees areas for working with Beijing, such as combating climate change, it will not trade cooperation for compromising on its principles regarding human rights and rule of law, the officials said. AP