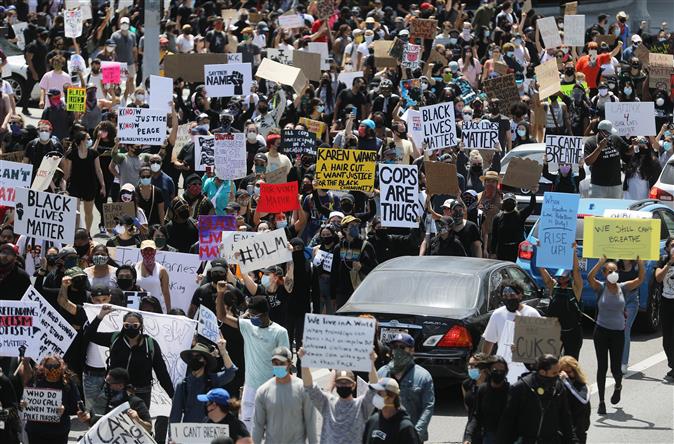 Thousands of people protested in Los Angeles to condemn Azerbaijan and Turkey’s role in hostilities against Armenia in the separatist Nagorno-Karabakh region.

The protest on Sunday came as Azerbaijan and Armenia accuse each other of violating a cease-fire deal, brokered by Russia, that took effect at noon Saturday. The deal stipulated that the truce should pave the way for talks on settling the conflict.

Crowds gathered in front of the Turkish Consulate in California’s largest city Sunday afternoon, waving Armenian flags, chanting and toting signs that said “peace for Armenians”, among other messages.

Earlier, groups gathered along streets, with some climbing on top of cars to wave the banners. The demonstrations appeared to be largely peaceful.

Southern California is home to the largest Armenian population in the United States and an East Hollywood neighborhood was designated Little Armenia in 2000.

The recent bout of fighting between Azerbaijani and Armenian forces started September 27 and left hundreds of people dead in the biggest escalation of the decades-old conflict over Nagorno-Karabakh since a separatist war there ended in 1994.

The region lies in Azerbaijan but has been under the control of ethnic Armenian forces backed by Armenia. Armenians refer to it as Artsakh.

Turkey is supporting Azerbaijan and Turkish President Recep Tayyip Erdogan recently said “our Azerbaijani brothers are now waiting for the day they will return to their land”.

As protestors gathered Sunday, Los Angeles Mayor Eric Garcetti tweeted in support, also attaching a letter to US Secretary of State Mike Pompeo from a group of mayors across the country urging the United States to help deescalate tensions in the conflict.

“We welcome the ceasefire and it must be respected,” Garcetti tweeted. “We need our national leadership to step up (and) help bring peace to the region. Turkey must disengage. ”

Several Armenian Americans have returned to the region to volunteer for their home country. AP