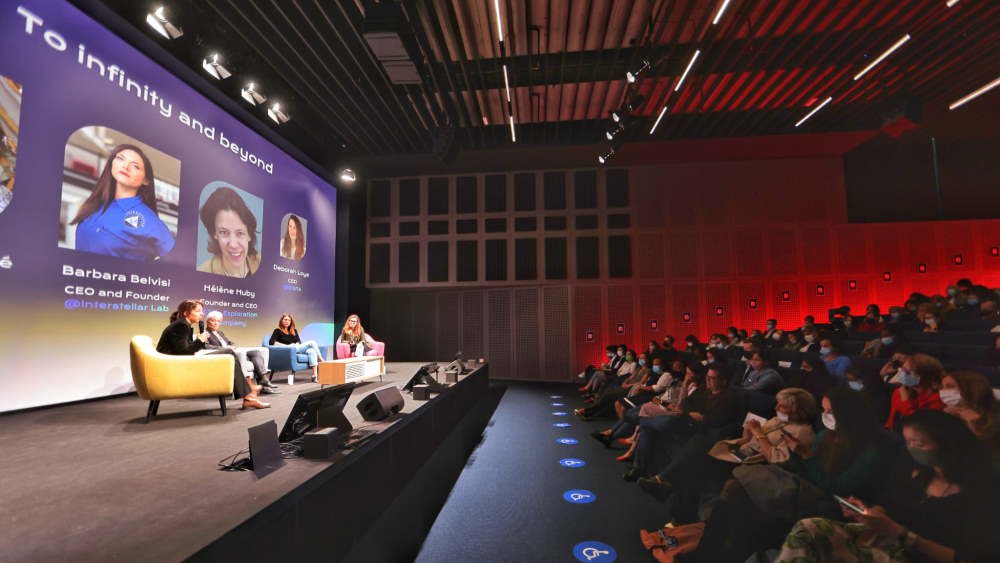 “It is not so much the spirit of conquest that drives us as the quest itself. These words from Claudie Haigneré, the first French astronaut to fly aboard the International Space Station (ISS), apply perfectly to this force that drives female entrepreneurship: the human quest to surpass oneself, the quest for meaning and of what the individual can bring to the world.

The Ambassador and Advisor to the Director of the European Space Agency, was one of the guests of the third edition of F for Women, an event organized by Station F on October 6. About twenty talented entrepreneurs in space, medicine, finance… testified to their ambitions. Their backgrounds show that women are not afraid to step out of their comfort zone and think big!

Investing in space to better preserve the Earth

“In less than 10 years, humans will install living spaces on the moon, this is no longer science fiction, enthuses Helen Huby. A whole new economy will emerge and Europe must take its place at all costs. Now is the right time to get started or invest in space startups. Former director of innovation at Airbus Defense & Space, this enarque piloted the Sparrow mini-space launcher project at Ariane-Group.

Hélène Huby also co-founded a venture capital fund, Global Space Ventures, in 2017 and embarked on business creation by co-founding this year with five other former Airbus alumni in Munich. The Exploration Company.

The ambition of this start-up is to create the first European lunar vehicle for cargo and manned flights that can return to Earth for reuse, for 30% of the prices displayed by American startups. The Exploration Company has just integrated TechTheMoon, the incubator dedicated to the Moon of Nubbo in Toulouse.

For the entrepreneur, space exploration (transport and installation), the management of satellite debris, the use of the Internet of Things (IoT) in space and the data that will be collected there are among the niches of future to invest.

“Space is not reserved only for American billionaires who build rockets”, launches Barbara belvisi, founded Interstellar Lab in 2018 and raised 3 million euros last September. This start-up, established both in Los Angeles and in the Paris region, manufactures environmentally controlled domes. These autonomous living modules are designed to operate in a closed loop (recycling air and energy) and allow human life and the cultivation of plants.

“A durable and ultralight product that will be as useful for life in space as for our planet,” insists the entrepreneur who works with Nasa and Dassault Systèmes. R & D in the field of space makes it possible to take a step back on the consumption of our natural resources. The resulting innovations will be used to fight climate change, for example, or to preserve biodiversity on Earth. “

Reducing the impact of human activities on the planet is a favorite subject for Aude Guo. “We did not think we would invest in such a large-scale project at the start,” confesses this former member of the McKinsey firm. The young woman embarked on entrepreneurship with a colleague, Clément Ray. Accompanied by Bastien Oggeri and Guillaume Gras, they created Innovafeed in 2016.

The start-up’s goal is to halve the carbon footprint linked to animal feed, which swallows up half of the world’s crops. “This area seemed to us to be a good area for reflection in order to have a significant impact,” assures Aude Guo. The founding team investigated, going up the entire food chain, to find that a fundamental element of animal feed was underexploited while it had exceptional nutritional qualities and its production consumed much less natural resources. : insects, and more particularly the larvae of the fly Hermetia illucens.

“From the second week of the project, we laid all the concrete foundations on paper,” explains the entrepreneur. What would the facilities look like, the main issues we would face, the people we needed to talk to, the different steps to be completed, the cost and income items, etc. This allowed us to make our project more concrete and to move forward by going step by step. ”

Innovafeed counts today 60 employees and produces 7 billion fly eggs per week. In 2020, the start-up completed the construction of a 15,000 m² factory in Nesles (Sommes) and raised 140 million euros in funds to set up another in the United States.

Surround yourself with the best employees to grow

Christine de Wendel also raised a lot of money, with Victor Lugger and Tigrane Seydoux, co-founders of Big Mamma restaurants. After a meteoric career at Zalando and ManoMano, this Insead graduate founded Sunday in March 2021.

With already 170 employees, Sunday announced a funding round of $ 100 million (85 million euros) at the end of September to support its international deployment. “There is so much money on the market, it’s much easier to raise money today than it was 10 years ago,” assures Christine de Wendel, US chief executive officer. In the United States, the roles have been reversed and entrepreneurs are in great demand for funds. If you can position yourself on an uptrend and capture the money, it is possible to quickly materialize a large-scale project. “

For the entrepreneur, the key to this dazzling success is above all to build the right team very quickly: “For investors, the key lies in the team’s confidence and potential. We recruited the most interesting people we had worked with over the past twenty years. ”

With that foundation established, “we really focused on executing the vision. It’s a very intense experience, but with the right people and if everyone is aligned with the same vision, it’s a good foundation to go far! ” To infinity and beyond…