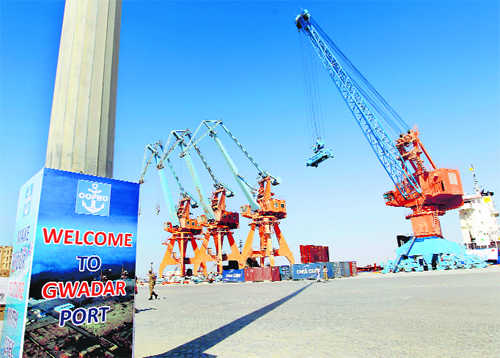 All-weather allies Pakistan and China have agreed to use the full potential of the strategic Gwadar Port in Balochistan province, a major project under the CPEC that provides the Communist-giant an opening to the Arabian Sea, according to a media report on Friday.

The CPEC is the flagship project of China’s ambitious USD 60 billion Belt and Road Initiative (BRI) and it links China’s Xinjiang province with Pakistan’s Gwadar port in Balochistan province.

The decision to tap the full potential of the Gwadar Port was taken during a meeting between Pakistani and Chinese officials on Thursday via video link, the Dawn newspaper reported.

The sixth session of the Joint Working Group on Gwadar reviewed the implementation of China-Pakistan Economic Corridor (CPEC) projects in Gwadar and also deliberated upon the future course of action with regard to development of Gwadar city, port and the free zone, it said .

The two sides reviewed the progress made on various projects, including full operationalisation of the Gwadar port and its inclusion in the Afghan Transit Trade route and vowed to redouble efforts to tap the full potential of the Gwadar Port.

The meeting also noted the completion of the project Gwadar Free Zone Phase-1, and start of work on the bigger Phase-II, covering an area of ​​2,221 acres, the report said.

The CPEC is a collection of infrastructure and other projects under construction throughout Pakistan since 2013. Originally valued at USD 46 billion, the projects were worth USD 62 billion as of 2017.

India has protested to China over the CPEC as it is being laid through Pakistan-occupied Kashmir (PoK). —PTI