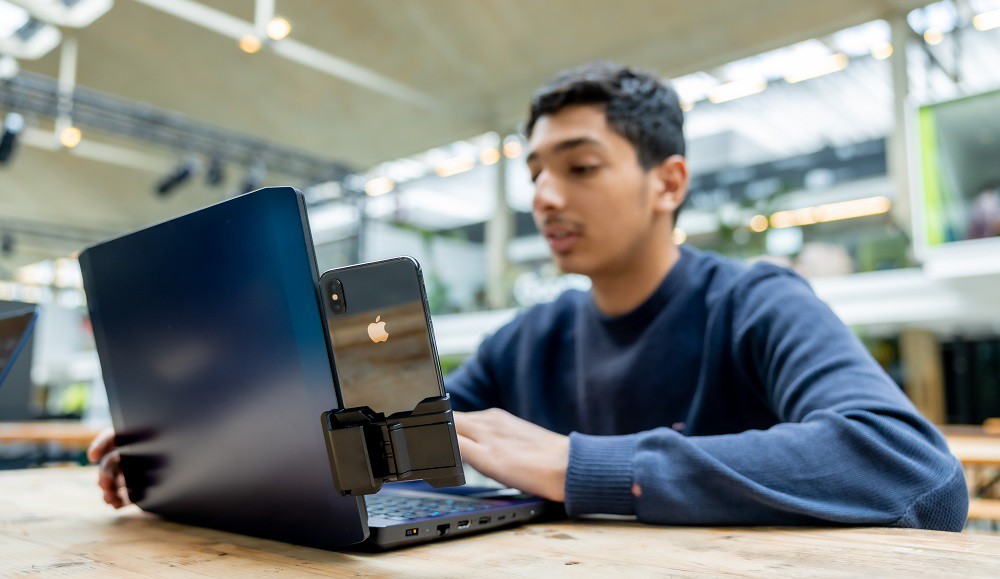 Starting from an idea and a simple 3D printer, Mehdi Maizate had its product listed three years later, in August 2021, in all Fnacs in France. The president and founder of Makagency, who employs three people in Aulnay-sous-Bois (Seine-Saint-Denis), was just a simple computer student when he designed the first prototype of the “Phoneside”.

“To develop my applications, I needed to use both my computer and my phone,” explains Mehdi Maizate. However, at Simplon.co, where I was studying, we had 3D printers available. It was there that I had the idea of ​​making a support allowing my smartphone to be hung on my computer screen. “

Medalist at the Lépine competition

His comrades are interested in the object, and ask him to make them. He therefore improved the prototype, and ended up creating his microenterprise, in 2017, to manufacture and sell his “Phoneside”, before switching to SASU at the end of 2018. The invention has meanwhile evolved and received its recognition in 2019 with a medal at the Lépine competition!

“At the beginning, we manufactured everything ourselves, with our 3D printers, in the incubator of the Maison de l’Emploi d’Aulnay-sous-Bois, ‘Convergence Entrepreneurs’, where we are based. But the cost price was too high, and the production times too long, ”explains the entrepreneur. In July 2020, he therefore launched a crowdfunding campaign on the Kickstarter platform, which allowed him to raise 35,000 euros.

With this money, he buys two industrial molds (worth 15,000 euros each), which allow a Chinese subcontractor to produce the parts for the Phoneside more quickly. This allowed Makagency to boost its turnover, going from 100,000 euros in 2020 to a forecast of 250,000 euros in 2021.

This increase in its production capacity was also a prerequisite for its partnership with Fnac “which we made wait several months before putting our Phonesides on the shelves, the time to have sufficient and sufficiently qualitative production”.

In addition to sales in supermarkets and wholesalers, which represent in all 45% of sales of Makagency, the company also sells 27% of its production directly online and 28% in BtoB, mainly as an advertising object, flocked customer logos. Makagency also designs and prototypes other products for B2B, according to the needs of its customers.

In the future, Mehdi Maizate intends to hire three additional people by January 2022, in logistics and the sales force. He is working to repatriate the production of his parts from China to a Moroccan subcontractor, to be delivered more quickly and for personal reasons. “I am very attached to Africa and I would like to contribute to the economic development of this continent,” says Mehdi Maizate. And then I like the idea that my product is in my image: French, but of Moroccan origin! “