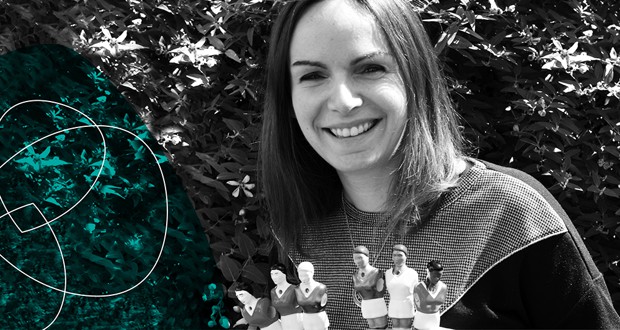 For three years, Ingrid Bergaglia took over the presidency of the Bonzini family business, well known for its manufacture of table footballs. Its SME is struggling to hire women, but it has incorporated them for a long time in the field of its wooden games.

All in discretion, the essential table football of the Bonzini brand has made its feminine revolution. Above the game board, screwed onto the stainless steel bars, figurines with long hair and toned breasts are inserted between the traditional male models.

Born in the 1930s, table football is a little ahead of the professional football industry, which finally gives more visibility to women involved behind the football. “We have included female figurines on our games since 2006, because it was on this date that the French women’s table football team began its titled international career”, explains Ingrid Bergaglia, president of the SAS Bonzini since 2017, “It wasn’t me, but my father Gérard who decided to create them. At the time, he had shaped them a bit like tennis players, in skirts and with squared hair. In 2018 we drew them again with my husband. They now wear shorts and long hair tied back. “

An object rooted in popular culture

Thirty-year-old, mother of two children aged three years and seven months, Ingrid Bergaglia is the embodiment of this generation of leaders who are not afraid to take over a family business by scratching it with a personal touch. Graduated in international law and a master’s degree in marketing in brand identity, she joined her father ten years ago, after working for the design agency Saguez & Partners, then the advertising agency Dentsu. Aegis Network.

This estrangement finally brought her back to her roots. “I needed to be totally in tune with the values ​​of the company I was working for. All in all, it was at Bonzini that I felt most at home. I have always known the company. However, when I arrived, my father gave me a very demanding job interview. We rediscovered ourselves at work. But neither he nor I anticipated that I would one day take the presidency. “ With its plump body and characteristic figurines, the table football is a unique piece of furniture, now anchored in French popular culture.

Take care of your family life

Passionate about design and furniture creation, Ingrid Bergaglia finds it all the more interesting because it can now be personalized as desired. The young woman grew up following step by step the history of this SME, which is coming to its fourth generation of leaders. Created in 1935 and based in Bagnolet (Seine-Saint-Denis), Bonzini has 42 employees, for a turnover of 8.1 million euros, of which 38% made for export. Each year, the workshops produce between 5,000 and 5,200 games. The sturdy wooden and steel table football is 100% made in France. It is the result of a subtle blend of industrial production and artisanal carpentry.

Gérard Bergaglia, an active retiree, still spends most of his time alongside his daughter. Both are driven by the same human values: “The house’s policy has always been not to make any redundancies, and to stay French. The waves were difficult to overcome ”, recalls Gérard Bergaglia. Ingrid intends to keep this guideline. A meticulous worker, she is nevertheless keen to manage her family life as well as possible. “My mother was a housewife and my father devoted himself entirely to the business”, she explains, “Today the cursors have changed. But with a good organization and the understanding of my husband who knows the constraints of a business leader, we function well. “

Between the development of by-products and ongoing projects with national monuments, it is teeming with development ideas, but struggles to find the time to realize them. More follower of a peaceful diversity than of a militant feminism, Ingrid Bergaglia regrets not having more women in her company. It is hardly that in the offices that one crosses some of them … “We need carpenters, mechanics, assemblers. Professions where women have been absent subscribers for years ”, deplores the entrepreneur.

As for real football, Ingrid says she has a slight preference for women’s competitions. She vibrated to the rhythm of the Blue in 2019. “I find the women’s matches more fair, and less violent than the men’s matches”, she estimates, adding, all smiles: “ At least, behind a table football, the teams can be mixed and fight on an equal footing! “