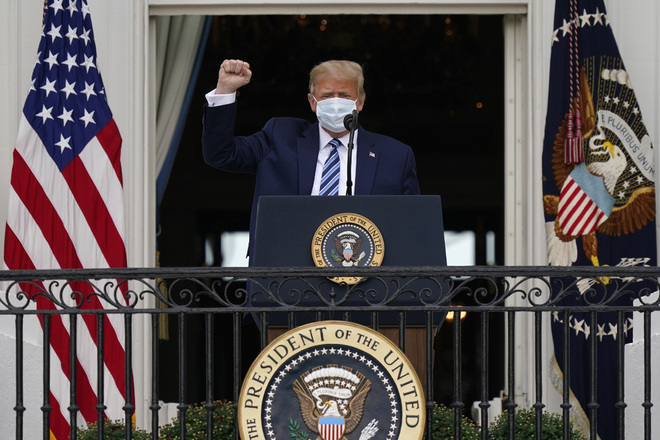 US President Donald Trump has alleged that Democratic presidential candidate Joe Biden in his previous capacities as Senator and Vice President was busy shipping jobs to China, prompting the latter to hit back. Biden said Trump will be the first president in the modern American history to “leave office with fewer jobs than when it began.”

Making his first public address from Blue Room Balcony of the White House after being discharged from hospital where he was treated for Covid infection, Trump charged Biden and his campaign of taking the country on the path of socialism, which he vowed would not let him do . “The Democrats’ is a socialist program and platform. It really is more than socialist. It’s not just socialist; it’s beyond socialism, ”he said.

As one member from the audience screamed “communist”, Trump said, “Communist. That’s about right. ”

Biden, who was campaigning in Erie city in the battleground state of Pennsylvania, on the other hand alleged that Trump was only protecting the interests of the rich and billionaires. “Trump is leaving us a ‘K-shaped’ recession, where those at the top keep going up, while everyone in the middle and below are seeing things get worse,” Biden said. “It means that while the top 100 billionaires in America have done pretty well, they’re up more than USD 300 billion this year – you get the bottom half of that K-shape. The downward slide. Because the fact is, President Trump can only see the world from Park Avenue. I see the world from Scranton. From Erie. And that’s who my Build Back Better agenda is for, ”he said.

The Democratic presidential candidate’s campaign does not allow a large gathering because of Covid restrictions, with at the most a score of people sitting at a distance. On the other hand, Trump’s first public event at the White House was full of enthusiasm and energy with his black and Hispanic supporters chanting “We Love You” and “Four More Years”. Trump, 74, and First Lady Melania, 50, tested positive for Covid last week. PTI