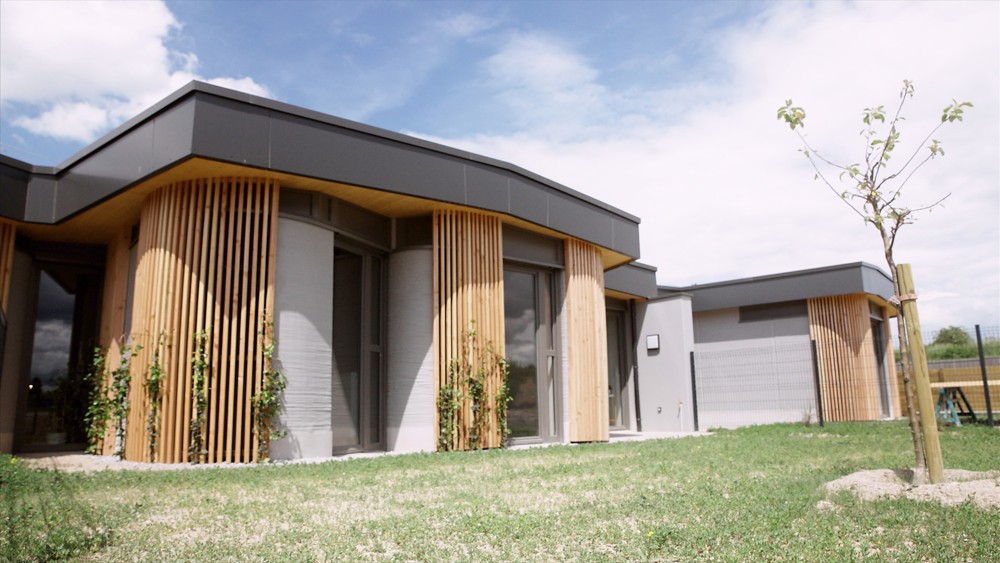 Multiplication of projects, launch of new ranges of concrete, deployment of production units: concrete 3D printing is arousing mobilization of the construction industry and building materials in France.

“Things are moving. We have projects in the tertiary sector as well as in housing,” says Michèle Duval, director of the concrete division for France of the Swiss building materials group Sika. ” The technology works. We know how to print common inks correctly. It’s mastered at the level of robotics and software, ”adds its director of innovation for France, Fabrice Decroix.

Clearly, concrete 3D printing, which has slowly taken off over the past decade after an invention in the 1980s, is changing in dimension. The technique consists of robotizing the manufacturing process: the articulated arm of a robot ejects the material – we speak of “ink” by analogy with a printer – and gradually traces a sort of sausage whose convolutions and stacking of layers were programmed on a computer with the prior development of a digital model. Walls of individual houses have been made in this way, particularly in France, where a milestone has just been reached in this area.

Plurial Novilia, a company of the Action Logement group located in the Grand Est and Ile-de-France, has just inaugurated in Reims, in a new eco-district (Réma’Vert), the first five houses entirely made by combining the printing 3D concrete and precast elements offsite. These houses (from T3 to T5), which must all be occupied by the beginning of July, are the culmination of four years of research and experimentation.

This project, baptized “Viliaprint”, associated, among others, XtreeE, a young a leading Ile-de-France company in 3D printing (the Vinci and Holcim groups are shareholders), the firm Coste Architectures, the cement manufacturer Vicat, and the construction company Demathieu Bard. He has confirmed three crucial advantages of 3D printing: the reduction of construction time; the significant reduction in material consumption for erecting walls; and finally, the possibility of much greater architectural creativity.

“Of the five houses, we have gained three to four months of construction, but we are gaining above all in terms of material”, indicates Romain Duballet, the project pilot on the XtreeE side. “The saving in materials was around 50%”, specifies the managing director of Plurial Novilia, Alain Nicole.

The manufacture of the walls testifies to the technological progress made compared to Yhnova, the first house in the world intended to be lived in, which was built in 2017-2018 in Nantes on behalf of the social landlord Nantes Métropole Habitat. The thirty or so walls produced by XtreeE on its Rungis site were produced without formwork, while those of the Nantes house were covered with polyurethane formwork inside which the concrete was then placed. However, the manufacture of load-bearing walls was not yet mastered for Viliaprint – since it was necessary to pour reinforced concrete at the junction of the walls in order to reinforce the structure of the houses.

The construction of multi-storey buildings remains a great challenge. “We are going to work on an R + 2 project (two-storey building). It’s more complicated for R + 3 and 4, says the general manager of Plurial Novilia. We are building a team with Lafarge. The idea is to use a robot on site like the Germans do. The construction of this building intended for collective housing should be launched in 2023 for delivery in 2024.”

The additional cost of using 3D is another unanswered question at this stage. For Viliaprint, it is estimated at 25%. “The economic model is not there, because we do not make large series”, judges Alain Nicole. But, for construction and housing professionals, the real issue remains the development of standards which would make it possible to deploy 3D in a more fluid way.

At this stage, Viliaprint-type projects in France involve obtaining a technical experimentation assessment (Atex), an evaluation procedure carried out by a group of experts from the Scientific and Technical Building Center (CSTB). “The standards do not allow building with 3D printing, but it is a breakthrough technology, and yes, there is a general boiling”, comments the general manager France of the products & solutions activity of the Swiss giant of the Holcim cement, Noël Le Floch. Sign of the times, Lafarge is preparing for September a brand dedicated to 3D printing on the French market.

For its part, Vicat, the last independent French cement manufacturer, has just launched its specific brand, Lithosys. Beyond a range of concrete inks, Vicat intends to print for third parties and even sell production units that have developed its own technology.

In fact, the sale of printing cells has begun in the construction industry. Spie Batignolles, which had already acquired a first unit from XtreeE, plans to acquire one or two additional “heads” in order to extend its network in France, its first printer being installed, since the end of 2021, on its hardware platform. of Ollainville, in Ile-de-France. For the public works group, 3D makes it possible, among other things, to optimize the production of formwork, reservation boxes (the passage of ducts and pipes in the concrete slabs), walkway segments.

The 2024 Olympics without their 3D gateway

The 2024 Olympics will go ahead without any of their announced technology showcases. The realization of the footbridge 40 meters long and 5 meters wide to pass over the Saint-Denis canal, in Aubervilliers, will ultimately be done without using 3D printing. This world first, given the length of the bridge, consisted in printing its “honeycomb” structure, hence the estimated saving of concrete of up to 60%. This option was abandoned, as the schedule for delivery of the work could no longer be respected, given the delay. The footbridge will have a metal deck with a secondary wooden structure, specifies the Olympic works delivery company (Solideo).