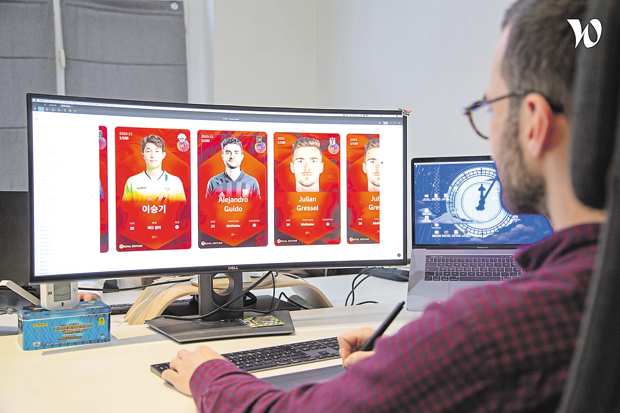 In the borderless world of Web3, France is weaving an increasingly solid web. Among the herd of French Tech unicorns, these start-ups valued at more than a billion dollars, two French successes have recently asserted themselves as world leaders in blockchain.

Sorare, which has developed a “fantasy sports” game based on digital cards in the form of NFTs, achieved a historic seed round of 680 million dollars at the end of 2021, bringing its valuation to more than 4 billion euros. With the ambition to become a “entertainment giant 3.0”, the model developed by Nicolas Julia and Adrien Monfort in 2019 continues its rise internationally with a partnership signed last May with Major League Baseball in the United States.

A few months earlier, it was Ledger, whose factory is located in Vierzon (Cher), which rose to the rank of unicorn with a funding round of 380 million euros. The digital wallet company is now valued at over $1.5 billion. But its managing director, Pascal Gauthierthinks big and told the Echoes that he was aiming “a valuation of 100 billion dollars”. Ledger quickly became a global benchmark and today boasts more than 3 million customers in 190 countries. The company claims that it secures around 15% of all cryptocurrencies globally.

Strengthened by this dominant position in their sector, Sorare and Ledger are part of the fifty or so French digital players who have decided to join forces to give birth to the NFT Factory, a space of 400 square meters which should serve as a showcase for the ecosystem in Paris. A “fertile ecosystem”, according to Thibaud Elzière, the co-founder of the famous start-up studio eFounders, which has just launched a vertical dedicated to Web3 called 3Founders.

“Since the announcement of the launch, we have been overwhelmed with requests from entrepreneurs who want to join us to embark on this new Eldorado”, explains Thibaud Elzière. The first project to hatch is Cohort, a platform that allows brands to offer exclusive experiences to their customers via NFTs. “There are many sectors on the verge of being disrupted by blockchain, and France has the talents capable of meeting this challenge”, believes the one who has already participated in the hatching of two other tricolor unicorns, Aircall and Spendesk.

But it’s not just the start-up nation that has its sights set on the Internet of the future. If the blockchain has already made a place for itself in some large French groups for its ability to trace and guarantee the authenticity of certain services or products, more and more French companies do not want to miss this technological turning point and are investing.

Moreover, investing in the field of Web3 presents the opportunity for French companies ” of break free from international platforms to regain their digital sovereignty through decentralized technologies”, according Frederic Montagnonat the head of Arianee , a start-up specializing in NFTs which has just raised 20 million euros.

More and more French companies are even considering associate, or even acquire a pure player in the sector over the next three years, with 28% of large and midsize companies now considering this option. Like Sorare, which claims nearly 325 million in turnover in 2021, French pure players are attractive for their ability to grow rapidly. Internationally, they are 44% to have an annual growth higher than 50%, against 70% in France.