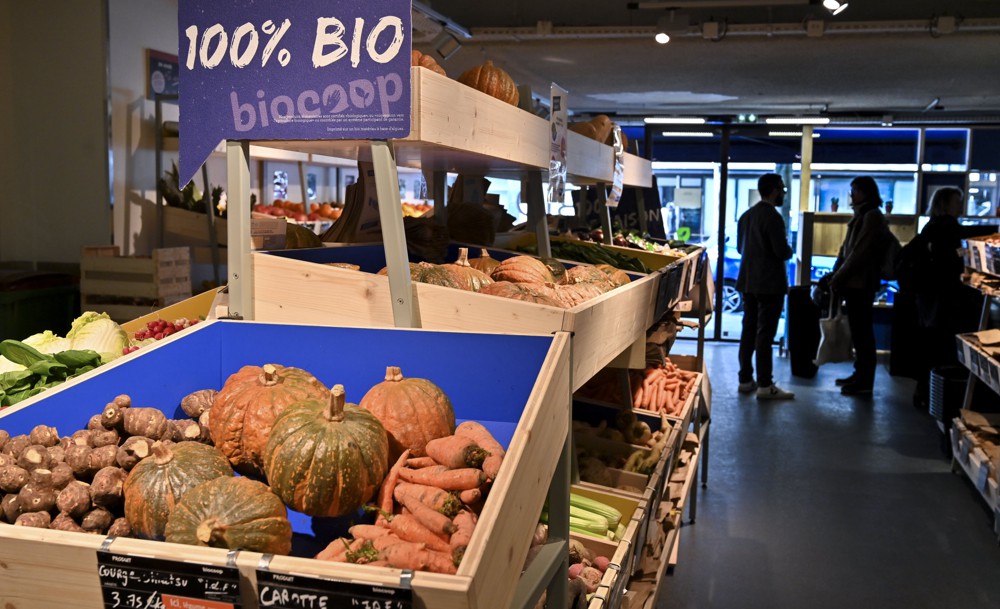 Initially, Grégory Fachon cultivated 7,000 m2 of vegetables in hand. “I lost ten kilos in six months, which I have never found since my installation in 2011”, remembers the forty-something a bit sore, thin mustache, braided sweater and jeans powdered here and there with earth. He has since gained more than fourteen hectares, around Rennes, cultivated while organic, and manages to pay a salary of 1,500 € per month to part of his team.

A restaurant has even opened on the farm, with walls lined with sawdust and, on shelves, biscuits from the Biocoop brand, leader of organic specialists and one of Grégory Fachon’s distributors. The market gardener supplies seven Biocoop stores (and three restaurants) in the Rennes metropolitan area. Two points of sale have just opened their doors there, in addition to the 750 or so that have already spread to France. Grégory Fachon has enough outlets: when Super U approached him, he handed over the contract to a friend who made the condition not to package his organic plastic production.

Large-scale distribution is increasingly operating on Biocoop’s flowerbeds, which in 2020 represented 12% of the market in France, with a turnover of 1.6 billion euros. The pressure also comes from the regulars of the committed brand, who fear that by playing elbows too much with large-scale distribution, it will lose its “soul”. “Its expansion is criticized, but it has done well to deploy. Otherwise in ten years, it would no longer be there, ”said the producer.

The model is a priori still expandable: “There are less organic territories, but when a Biocoop store sets up, it creates emulation, producers find outlets”, remarks the president of Biocoop, Pierrick De Ronne, also manager of a Scop of three Biocoop stores between Annonay and Saint-Etienne. A thousand people apply each year to open their store, for on average seventy openings effective, after validation by their peers.

“The objective is to mesh the territory, but we are not in a race to open stores,” he says. Objective: a store every fifteen minutes (by car) on French territory. In the Rennes network called Scarabée, an employee slips, a bit of revenge, that they seek to gain ground against Carrefour City, “which tries to prick our producers”.

At the risk of too rapid development, regrets Sylvie, a client for thirty years. “I continue to go to Biocoop out of nostalgia, even though I’m disappointed that the mood has changed. Today, I no longer have the impression of entering a supermarket – no, the term is harsh. Let’s say self-service. Before, the staff knew more about the product and were more committed, ”considers the vegetarian with the hippie look.

The team that runs the thirteen stores in Rennes makes this concession: “Due to our fairly strong development, we have perhaps struggling to recruit at the same pace, argues Marc Chevalier, member of the management board. It takes two years to train an employee. »At the Saint-Grégoire store, there are 13,000 references to know. And to members who accuse their cooperative of striving for hegemony, he reminds us that the total surface area of ​​stores in the Rennes area hardly exceeds that of the only Super U on rue de Nantes.

Today, Scarabée displays the insolent figure of 60,000 members. More than eight out of ten customers are shareholders. “Initially, in the 1980s, organic activists opened their store,” recounts a former employee who worked in one of Biocoop’s four logistics platforms. The mission was to develop organic on French territory, therefore to bring together producers so that the purchase price fell. Then the supermarket arrived in organic and our prices were not aligned with it. The stores, run by activists, did not know how to work on their margins, so in the platforms, we went to look for professionals. But we limited the difference between the lowest and the highest salary [aujourd’hui l’écart est de 1 à 5], so when we hired conventional executives [non issus du secteur bio] with this salary, we ended up with bad guys! There were hiccups, the reorganizations were going too quickly, Biocoop was looking for itself, wondering how to keep the quality while being competitive, to remain militant while growing bigger. And at the logistical level, it was sometimes complicated to juggle between local demand and national demand… ”

At the start of 2021, Biocoop appoints Sylvain Ferry, former Carrefour employee, to its general management… Quite a symbol? “We were looking for someone to grow Biocoop, who had reached a complex size, with almost 1,200 employees, explains Pierrick De Ronne. But there are no large distribution practices at Biocoop. For example, if we put penalties on suppliers for non-compliance with delivery deadlines, they are donated to charities or structures that carry our values. “

To stand out from its competitors, Biocoop hardens its specifications : from this year, ultra-processed products (Siga index 7) are thus removed from the shelves, and packaging must contain less than 20% petro-sourced plastic. By 2025, all packaging must be recyclable and effectively recycled. “We are more and more demanding, even if it always takes time to make decisions in a cooperative system,” he notes. At their level, stores may decide to give themselves more restrictions than imposed on them by the national charter.

But all have this credo: “make organic accessible to all”. Which forces you to make concessions. On the priority to the local, for example: the grocery department is mainly made up of products of the Biocoop brand or of platform suppliers “which allow economies of scale compared to a small local artisanal production”, indicates Scarabée.

In the fruit department, bananas are imported. A must-have product, says the President: “Bananas are the third in-store sale. Commercially, you have to position yourself. Prohibiting everything is complicated. “Like Corsican clementines,” joined Marc Chevalier, of the Scarabée management board. They are not local, but we cannot do without them, it is a flagship product! Lawyers, on the other hand, are rejected. “

Another decision is debated, that of the maximum authorized price (MAP), which worries some of the producers: in order to make its offer accessible to the greatest number, Biocoop defined in 2020 a single price (“a fixed and competitive price”) for 500 products, at national scale. Rennes refuses to do so, because it wants to favor local tomatoes, which are less productive and therefore often more expensive than in the South. Whatever the decision, there are always unhappy people.

Another once sacrilegious practice: Biocoop does promotions. “But we do very little and you will never find ‘4 products bought on the 5e free ‘because mass consumption is contested, guarantees the president. We make a promotion when there is overproduction, it’s a win-win with the producer. And it is not a taboo to discuss prices, because we want them to be accessible to consumers. We remain distributors, we trade, so when we discuss with suppliers and processors, we work on notions of volume, market, promotion, we still do this job. “Comment from an employee:” When I arrived in 2003, ‘marketing’, ‘business’, ‘promotion’ were bad words! “

In 2018, Biocoop went further, by broadcasting advertising on screens. “All the stores advertise. The voice of Biocoop was found diluted, it was necessary to communicate on our main principles ”, justifies Pierrick De Ronne, questioned by a member raised against advertising on Facebook. A Gafa. “It’s a tool for accessing consumers that we don’t know. The world is changing, ”replied the President, accustomed to the strong heads who form the hard core of customers.

The clientele is growing. Less snobbish and sectarian, according to some. “If Biocoop had remained on its hard core, it would have been eaten by supermarkets. It shouldn’t remain a niche market, ”says David, a 52-year-old vegan who is loyal to the store which continues to sell meat. “Before, organic customers were activists who bought primarily out of ethical and environmental conviction. Today, people buy first for their stomachs, the health of their children. It’s more eclectic, but it’s good, ”says farmer Grégory Fachon. Next modernization of Scarabée: develop click & collect and delivery with soft modes of transport. Amused reaction from the market gardener: “But with tricycles that work with electric batteries? ! Another debate, in which the followers of Biocoop will not fail to participate.